Jack Ensch has been a PAM lifetime member since 2004.  Jack grew up in Springfield and attended Illinois State University at the same time as PAM member Pete Troesch (See Tug Story).

The F-4 Phantom in the PAM Air Park was actually flown by McKeown and Ensch from the USS Midway.

During their TOPGUN assignment, the T-38A Talon, A4-Skyhawk and the F-4 Phantom were used in the training program.  Both McKeown and Ensch later flew the F-14 Tomcat.   All four aircraft types are displayed in our Air Park. 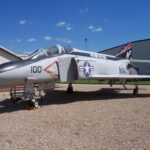 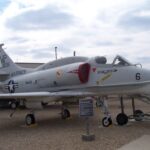 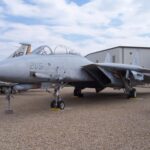 On 23-May-1972, LCRD Ron McKeown and Radar Intercept Officer Lt. Jack Ensch launched from the USS Midway for an operation over North Vietnam.

During the operation, McKeown and Ensch were attacked by six MIGs.  During the dogfight, they shot down two MIGs in one battle.  These two Naval aviators are one of only three Navy F-4 Phantom aircrews credited with twin killings of MIGs in a dogfight during the Vietnam war.  For this action they received the Navy Cross.  Note that McKeown would not accept the award until Ensch was released from being a Prisoner of War.

Listen to the accompanying  PODCasts and video regarding the dogfight.

How “Fingers” got his call name.

After the dogfight, McKeown was reassigned to become the first Commander of TOPGUN.  Several weeks after McKeown was reassigned, Ensch was assigned a new pilot.  On 25-August-1972, they were shot down.  The pilot was Killed in Action and Ensch was captured and became a POW. After seven months of imprisonment, negotiations released all POWs on 29-March-1973.

This link is an interview with Jack Ensch and his wife regarding his POW status.  The interview volleys back and forth between Jack’s perspective, the POW, and Kathy, his wife’s perspective.

Shortly after his release, Ensch rejoined McKeown and became Executive Officer at TOPGUN.

This video clip is a computerized model of how “Mugs” did a tumble to avoid a MIG 17 that was on their tail.  After evading this MIG, they engaged two other MIG 17s and shot them down.

“Mugs” and “Fingers” flip the F-4 Phantom in the dogfight where they were outnumbered 6:1 and shot down two MIGs.

One month after the event, “Mugs” became the head of Top Gun.

Background of the F4 Phantom II